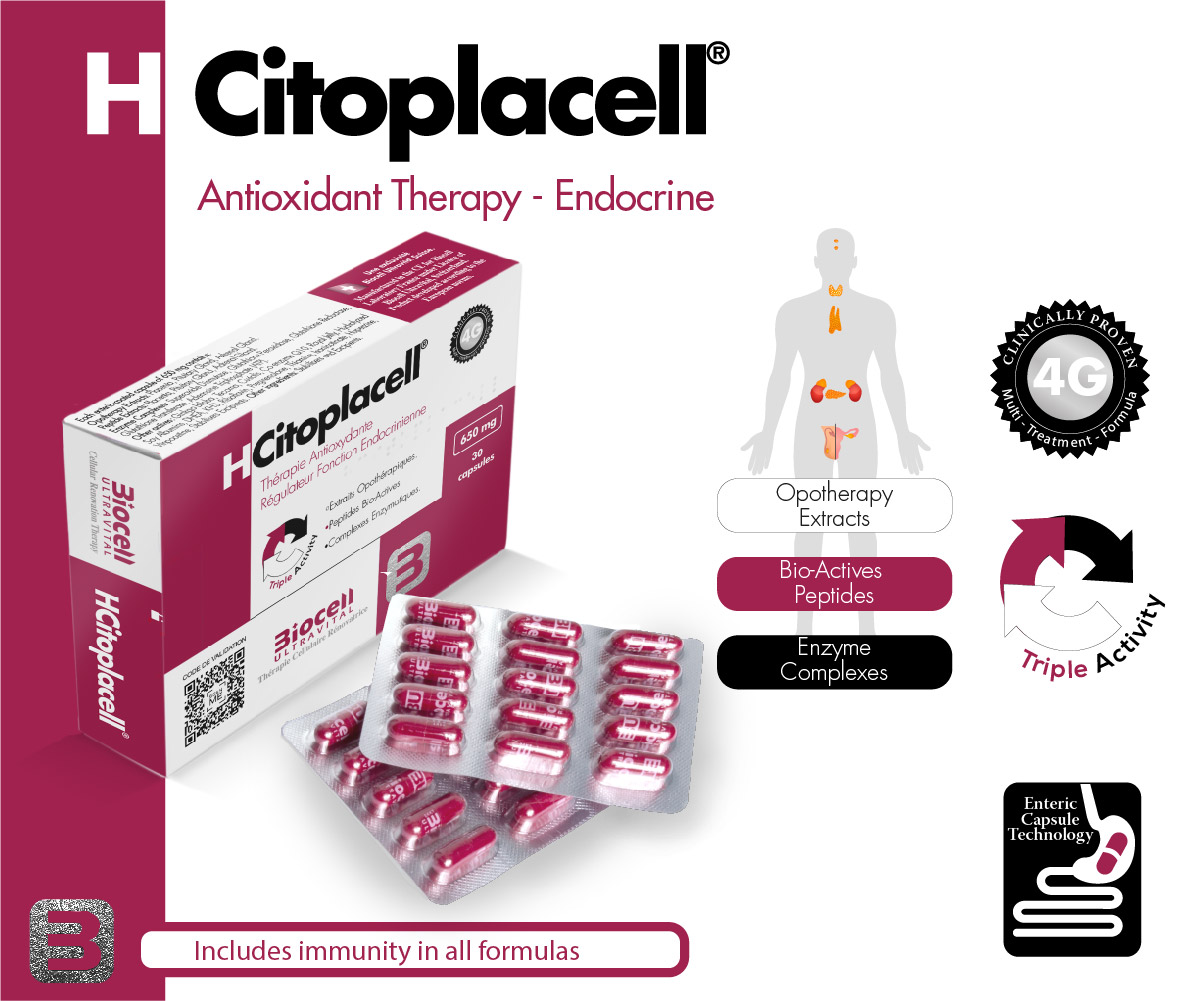 H Citoplacell 4G therapy works naturally to induce the body to restructure its endocrine mechanisms by regulating the functions of the cells either water-soluble or fat-soluble, involved in hormonal order. Acting in both cases through different protein transports and by empathy to cells. Its action as a cellular stimulant exerts an efficacy relying on its powerful antioxidant components for the activation of the cycles and its structure in the cells.

Old age is mainly a process of cellular, natural and progressive oxidation, but this mechanism can be slowed down by effective antioxidant medications, which minimize its effects and mitigate the ravages of organic and physical aging to prolong the life expectancy of each individual.

The oxygen that we use to breathe is one of the main components responsible for cellular oxidation and serves to produce energy throughout the body, but small portions of this element produce free radicals, which are formed normally in the body when metabolized. The powerful action of H Citoplacell 4G achieves a therapeutic effect in addition to the endocrine one. It provides high antioxidant protection, with an increase in cellular energy, and the components in its formula stimulate the function of the pituitary to improve the production of (HGH) Hormone, which decreases with age and stress. Among other benefits HGH is called the hormone of youth.

What is H Citoplacell 4G?
A 100% natural pharmaceutical quality treatment that does not contain synthetic hormones, but does contain components that are authentic hormonal precursors, so its indication is highly effective as an adjuvant therapy in endocrine functions, in addition to its powerful activity as a cellular antioxidant.

How does it work?

It works through cellular extracts and powerful 4th generation antioxidants. The synergy of amino acids and catalyst peptides in H Citoplacell 4G stimulates the pituitary gland to produce more HGH, the human growth hormone, better known as the “youth hormone”, it also promotes the production of testosterone or estrogens, depending on the sex of the patient.

How should I take H Citoplacell 4G?

As a preventive treatment for healthy people, one (1) capsule in the morning and one (1) capsule at night is recommended daily for six continuous or interleaved months. For people with any condition or disease indicated here, it is recommended to consume two (2) capsules in the morning and two (2) capsules at night daily for twelve (12) months as an adjunct to the medications indicated by the treating physician.

The dose can be increased according to the clinical picture of the patient and the judgment of the doctor; the results depend on the completion of the treatment.

What are the side effects of H Citoplacell 4G?

This product has no side effects or contraindications with other medications. It lacks toxic properties due to its 100% natural organic components.

Is Citoplacell 4G available in pharmacies?

Because it is a product of biological and non-pharmaceutical origin, it is not for sale in traditional pharmacies, only in some specialized ones such as:

The mechanism of action of peptides is similar to that of drugs, since the last three amino acid residues adjacent to the C-terminal region of peptides that have therapeutic activity are strongly linked to the active site where they have a higher inhibition specificity. The biopeptides are protected in enteric-coated tablets and capsules to prevent their degradation in the GI and seek their best absorption in the intestinal tract, thus benefiting the percentage of absorption in blood and to achieve this we have incorporated catalysts in each formula, as well as, three amino acids arginine, glycine and aspartic acid to increase the body’s chemical reaction for coupling and subsequent absorption. By incorporating this sequence into the different peptide chains at different positions in the standard formula, it allows new variants both in the negatively charged aspartic acid side chain like arginine, (positively charged). The formula and methods obey an exclusive patent of Biocell Ultravital 4th generation products to improve their absorption when they are administered orally to bind to the target molecule and its therapeutic effect is restored when it reaches its destination.

The components of the various formulas reach the cells, either directly or indirectly by blood in the case of oral products, and are incorporated by them, through the various means of cellular transport, depending on the size of the cells and molecules in question. In the case of large molecules, their incorporation into cells will be by receptor-mediated endocytosis, following the chain: vesicle, endosome and lysosome. In the case of smaller molecules, their incorporation will be by simple diffusion or protein-facilitated diffusion, depending on the case.

Oral use, consume before taking food to improve absorption, preferably with water.

As a preventive treatment for healthy people, one (1) capsule is recommended in the morning and one (1) at night daily for six intercalated months.

For people who have any condition or disease indicated here, it is recommended to consume two (2) capsules in the morning and two (2) capsules at night daily for twelve (12) months as an adjunctive reinforcement to the medications indicated by the treating physician.

It can be taken indefinitely as its components do not create a deposit.

Due to its peptide and opotherapeutic content in its formula, it could in some cases cause a slight headache, which disappears after a few minutes, nausea is very occasional and disappears in a few hours.

It can be safely combined with other medications.

In the recommended doses, no adverse reactions have been observed in any case.

Those who have diabetes must first be controlled.

Contains a box with two (2) blisters of 15 capsules of 650 mg each, and its manufacture is carried out in a sterile atmosphere according to the international regulations of the European Pharmacopoeia. Do not use after the expiration date, or when the blister is perforated or a capsule is broken, or when the security packaging is open or forced.

Keep in a dry and cool place at room temperature between 5 ° C and 40 ° C. Do not use after the expiration date, nor when the present vial has broken the safety cap, nor when the outer packaging is open or forced.

Biocell Ultravital guarantees the purity and quality of its products and is not responsible for damage to third parties that may cause malpractice.